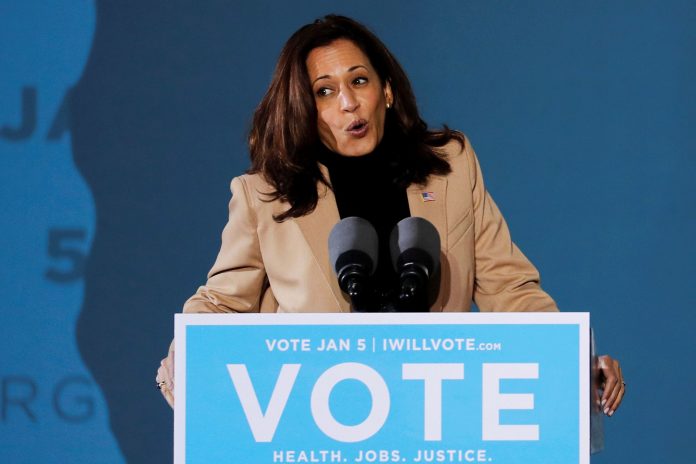 Democrat Senator and vice presidential nominee Kamala Harris has been caught in yet another lie, as she attempted to use the Civil Rights movement for political benefit.

In an interview with Elle magazine in October of 2020, Kamala Harris told the story of the time she demanded civil rights while she was in a stroller.

“Senator Kamala Harris started her life’s work young. She laughs from her gut, the way you would with family, as she remembers being wheeled through an Oakland, California, civil rights march in a stroller with no straps with her parents and her uncle. At some point, she fell from the stroller (few safety regulations existed for children’s equipment back then), and the adults, caught up in the rapture of protest, just kept on marching. By the time they noticed little Kamala was gone and doubled back, she was understandably upset. ‘My mother tells the story about how I’m fussing’ Harris says, ‘and she’s like, ‘Baby, what do you want? What do you need?’ And I just looked at her and I said, ‘Fweedom,‘” Elle’s profile on the candidate read.

As the interview reemerged and began circulating on Twitter on January 4, Maclean’s contributing editor Andray Domise discovered similarities between Harris’ story and a story told by Martin Luther King Jr. in a 1965 interview with Playboy.

During an interview with Alex Haley, King discussed his role in the Civil Rights movement, referencing the inspiration he received from a little girl:

“I never will forget a moment in Birmingham when a white policeman accosted a little Negro girl, seven or eight years old, who was walking in a demonstration with her mother. ‘What do you want?’ the policeman asked her gruffly, and the little girl looked him straight in the eye and answered, ‘Fee-dom.’ She couldn’t even pronounce it, but she knew. It was beautiful! Many times when I have been in sorely trying situations, the memory of that little one has come into my mind, and has buoyed me,” the Civil Rights leader said.

So it turns out Kamala Harris lifted her "Fweedom" story from a 1965 Playboy interview with Martin Luther King, by Alex Haley. Much thanks to @EngelsFreddie for spotting the similarityhttps://t.co/zDONW4Ueqs pic.twitter.com/yQuWZHYEMz

Joe Biden, Kamala Harris’ running mate, has been caught plagiarizing on several occasions, and it appears that Harris has chosen to follow in his footsteps.

This is not the first time that Harris has attempted to profit politically from stories of her involvement with the Civil Rights movement. In the Democrat primary, she tried to use her experiences as a weapon against her former opponent and current running mate, Joe Biden.

In June of 2019, Harris attacked Joe Biden on the debate stage for opposing forced busing, the forced integration of public schools through busing that occurred decades ago. Alongside that, she also brought up his work with notorious segregationists like former Democrat Senators James Eastland of Mississippi and Herman Talmadge of Georgia.

“It was not only that, but you also worked with them to oppose busing. There was a little girl in California who was part of the second class to integrate her public schools and she was bused to school every day,” Harris said.

“That little girl was me,” she added. As she spoke, her campaign tweeted a childhood photo of her in pigtails, staring intensely at the camera, as if this was a planned strategy all along.

There was a little girl in California who was bussed to school. That little girl was me. #DemDebate pic.twitter.com/XKm2xP1MDH

Confirming that this was indeed a strategic move, Kamala Harris’ campaign had already begun selling $30 t-shirts with the image of her on it before the debate ended.